John J. Wiles is the Managing Partner of Wiles & Wiles, LLP.  John began his practice in Marietta in April 1988 and within two years added two partners and a second paralegal. His firm has continued to grow, and now with six attorneys, three paralegals and three staff members, it has thrived over the years, which can be attributed to the quality of work that Wiles & Wiles, LLP consistently performs for its clients under the direction of Mr. Wiles. John regularly lectures on Landlord/Tenant Law and teaches real estate courses for credit through the Wiles & Wiles, LLP Real Estate School.

John was born in Stuttgart, Germany on August 21, 1957 to a proud military family. He earned his B.A. from The George Washington University in 1980 and his J.D. from The Stetson University College of Law in 1983.  John was a member of Phi Alpha Delta, a Staff Member of the Stetson University Law Review, 1982-1983, and the author of “U.S. v. Lee: Has The Retreat Been Sounded For Free Exercise?” 12 Stetson Law Review 852.

John is licensed to practice law in Georgia, Florida, Tennessee, Colorado and Texas.  He is a member of the Cobb Bar Association, the State Bar of Georgia, the Florida Bar, and the Texas Bar.  He is also a member of the International Council of Shopping Centers where he serves as the ICSC  Private Sector Chair for the Southern Division.

John was an Assistant Solicitor of Cobb County, Georgia, 1984, a State Representative in the Georgia House of Representatives, 1995-2003, and a Georgia Senator from 2005 to 2011 where he served as the Majority Whip.  Mr. Wiles represents Commercial Landlords and concentrates in the areas of Litigation, Real Estate Law, Landlord & Tenant Law, and Bankruptcy.

John is active in the community as a Member of The Cobb Chamber of Commerce.  He and his family attend NorthStar Church. 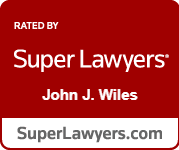 We will respond to your inquiry in a timely fashion. Thank you.